There is a range of overlapping factors which developers of mangrove carbon offsetting projects must consider.

Prospective investors in blue carbon credits have often focused on which accrediting standard is used, and the carbon (and therefore monetary) value of a site, with little understanding of how other factors influence project success or increase failure risk.

In contrast, for effective project implementation on the ground, the project proponent must take a holistic viewpoint encompassing technical, financial, legal, political and socio-economic planning.

All of these factors must be effectively balanced and managed, but socio-economic impacts are often core to a project's success. Until recently, this was often missing from conversations about "scaling up" delivery of blue carbon credits.

Buyers of blue carbon credits and investors in project sites should also look at these factors carefully as part of their due diligence process.

The concept of additionality is key to understanding how a blue carbon project is eligible for producing certified offsets – or not.

For project activities to qualify as additional, project managers must prove that their claimed emissions reductions would not have occurred without the project’s intervention.

For example, if a mangrove were severely damaged by logging for building materials and fuel, assisting regeneration with targeted planting may be required.

Conversely, acquiring management rights to a mangrove that is not being damaged, is not reduced in area, or is not under real and immediate threat does not allow the new owner to claim additionality as the ecosystem is likely to remain healthy and functioning without any additional intervention on their part.

The Plan Vivo Approved Approach: Demonstrating Additionality is an example of how standards approach additionality in nature-based offsetting projects.

Restoring mangroves is more than simply planting seedlings in straight lines. Although often pictured in press reports and accompanied by attention-grabbing headlines counting how many trees have been planted, these activities are prone to high rates of seedling loss or death within weeks to months of planting.

In contrast, for credits to be issued, carbon offset projects must be tightly monitored and reported on for a twenty- to thirty-year period, with reports verified by third-party experts every few years. Project managers need to consider the commitment to maintain and monitor the site for this length of time, and how to ensure project permanence - that the site remains in good health and functioning - after the crediting period has ended. Restoration interventions must therefore be well-planned and will be unique to each site.

Fair Carbon endorses Community-Based Ecological Mangrove Restoration (CBEMR), which incorporates mangrove restoration with community stewardship to combat historical and current mangrove loss. CBEMR focuses on creating a model of the composition and hydrology of the ecosystem, identifying the drivers of degradation or loss, and making targeted interventions to correct them. Natural regeneration can then occur, assisted by limited planting in key locations, for example, to stabilise the banks of a recreated channel or to accelerate recolonisation.

Mangrove Action Project is the leading provider of CBEMR training.

Carbon stocks and storage rates in mangroves can be highly variable. While default values are useful for initial feasibility modelling, measuring and monitoring carbon stocks in situ will be required as the project progresses, and must align with the strict technical methods accepted by the accrediting standard.

Measuring and monitoring above-ground biomass carbon is comparatively simple, and satellite imagery can be used to model trends in mangrove area change over time. Accepted methodologies which incorporate sediment carbon are more challenging, as below-ground carbon storage and accretion will require measuring.

For smaller sites, the additional costs in time and expertise to incorporate sediment carbon may exceed the additional offset income generated. In this instance, a standard such as Plan Vivo, which allows the use of extremely conservative default values instead may be more applicable, or selecting a different accepted methodology.

Mangroves are widely understood as essential nurseries for juvenile fish species that are important for subsistence or commercial fisheries. The biodiversity of terrestrial mammals, reptiles, insects, and birds is less understood despite their richness in mangrove forests.

Surveying which species are present on mangrove conservation sites – whether aiming to produce offsets or not - should be considered essential, as the presence of some animals may have a profound effect on project aims and design. For example, the discovery of endangered animal species on-site may either render ecotourism inappropriate - or provide a unique selling point.

Mangrove projects which preserve or restore habitat for critically endangered species will have an advantage when applying for funding and may be able to command a higher price per credit.

Our mangrove biodiversity predictor tool (beta test version) maps where species of conservation importance might be found and links to survey techniques are provided.

Mangroves exist at the interface of land and sea and are at least partially inundated by the tide. As such, they may be classified as terrestrial or marine ecosystems, or neither, or both. It is not unknown for mangroves to be subject to overlapping, contradictory or unclear legislation concerning ownership and management rights, or which government body has jurisdiction over management decisions. Where clear legislation exists in theory, it may not be enforced or may differ in practice as mangroves are often treated as a common resource regardless of ownership.

In some locations, land tenure may be resolved simply by purchasing land or acquiring rights to operate via aquaculture leases or logging concessions. In others, mangroves may be state-owned and residents or other stakeholders may have pre-existing usage or access rights. It should also be noted that in some locations private ownership only extends to the high water line, while below this point the area may be considered seabed and under state ownership.

In some countries, clear land tenure rules exist but there may not yet be a precedent for trading nature-based offsets on the voluntary carbon market, or the right to own and trade carbon storage services may be a grey area. Carbon stocks may also be counted towards a country's Nationally Determined Contributions (NDCs) and be considered ineligible for sale to avoid double counting.

For countries without legislation either allowing or prohibiting the trade of nature-based carbon offsets, it should not be assumed that operating in a grey area or policy void is an acceptable or sensible way forward. As interest in blue carbon increases, the current policy gap in many countries is likely to be closed and may leave projects stranded and unable to meet a financial or social commitment. This position presents an unacceptable level of risk to many funding sources.

Clarifying official permission to sell offsets should be considered essential and may require extended consultation with relevant government bodies before accreditation can proceed.

Will it be profitable?

Despite the hype surrounding blue carbon, only a handful of accredited and operational projects exist. Financial challenges play a crucial role.

Several existing projects have been set up to prove the feasibility of blue carbon projects in different geographies, not necessarily to make a profit - they may operate at a financial loss over the project's lifetime. These are philanthropically funded cooperative efforts between research institutions, carbon standards, local community NGOs, large international NGOs, and project developers or consultancies with a high level of expertise.

Extant commercial projects rely on the scale to overcome initial high costs and uncertainty of return on investment. Team members with the experience and skills to apply technical and social guidelines and produce the required documentation are expensive to hire and in short supply.

It should not be assumed that blue carbon sites will automatically be a lucrative proposition. It is important to establish whether income from producing carbon offsets is a viable option for your site before committing funds to a full viability survey or engaging with stakeholders.

The time lag between initiating a blue carbon project, finalising the technical design, establishing a legal operating framework, completing consultations with local stakeholders, and setting up alternative livelihoods can be months to years. This process is often followed by 1-3 more years before credits are issued. Costs of operation and registration are also heavily frontloaded.

With the current high demand for blue carbon offsets, numerous funding options are accessible once feasibility modelling has been completed, but few take into consideration the cost of producing this data and the time costs of legal, social, and sometimes political consultation. A minority of investors take advantage of this to offer early-stage funding deals which may be heavily weighted in their favour.

Fair Carbon in some limited cases may be able to match projects to reputable investors or developers. It should be noted we are not a source of project funding ourselves, nor are we in a position to offer detailed legal advice on individual funding deals.

While some carbon project sites may be located on privately owned land without other users to consider, coastal areas are heavily populated, and mangroves may be utilised for food, fuel, building materials, economic activities, cultural activities, or other significance.

Critical questions to ask include whether local people currently use the project site, how it is used, is the usage sustainable if site use needs to change to meet conservation goals, and how it can be done fairly. Solutions need to be developed with local user's input, not imposed upon them by an external third party. Community leaders or other recognised stakeholder groups should be meaningfully represented in project governance, receive an equitable share of project income, and take their own decisions on how that income is invested into their communities.

The Mikoko Pimoja mangrove project in Gazi Bay, Kenya, is an ideal example of inclusive governance and equitable benefit sharing.

In cases such as a mangrove degraded by unsustainable wood harvesting, simply planting more mangroves without taking action to halt the continuing damage to the site is not by itself an effective solution. Project proponents must consider both the negative economic impact this would have on wood collectors, and that the damaging activity may be displaced to another site.

For the desired behavioural changes to be both effective and fair, project proponents will need to work together with the community to develop viable “alternative livelihoods” or "alternative resources".

Alternative livelihoods replace, or better, improve on the income lost by ceasing the damaging activities, ensuring that they are effectively reduced. Real-world examples in mangrove projects include establishing woodlots to replace the building materials and wood fuel formerly sourced from the mangrove conservation area. 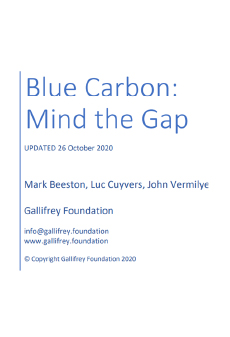 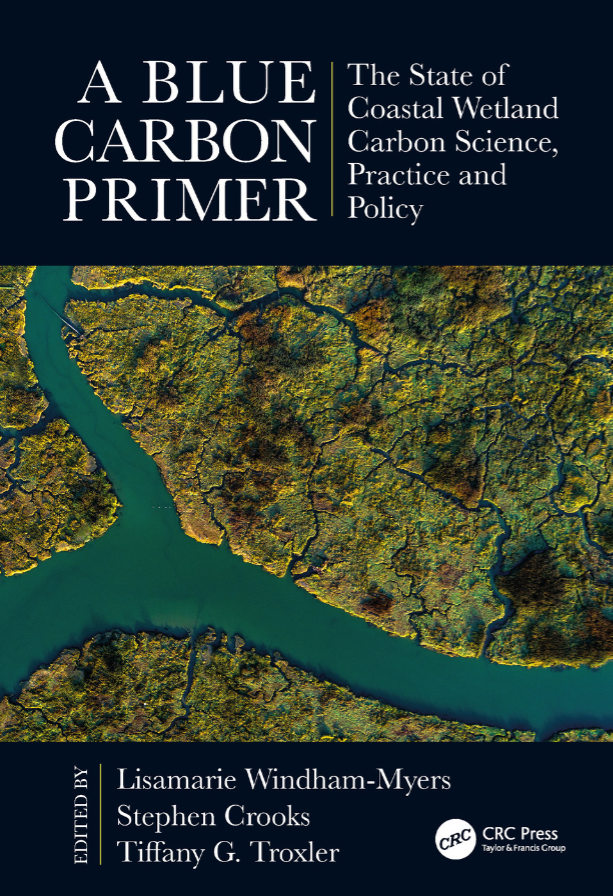 The most comprehensive resource for blue carbon to date, A Blue Carbon Primer draws on more than 100 experts in the fields of policy, carbon accounting, and project development. While not directed specifically at the creation of blue carbon offsetting projects, it still contains a wealth of relevant information including case studies from extant coastal conservation projects.